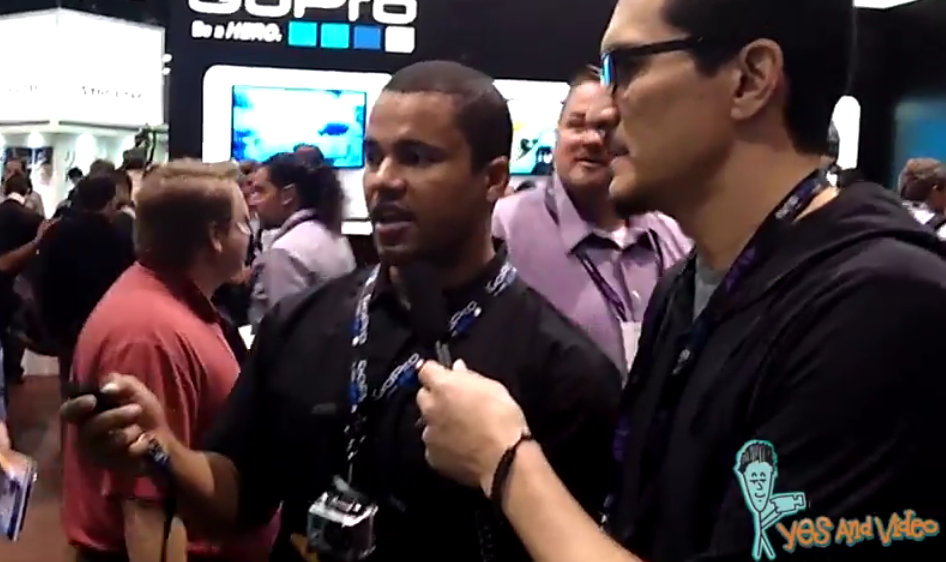 Yes And Video visited the GoPro booth at the NAB (National Association of  Broadcasters) Show in Las Vegas 2012.  Go Pro was showing off the new Wi-Fi BacPac remote and viewfinder coming this summer for $99.  Basically, the Wi-Fi BacPac is a small module that attaches to the back of any GoPro camera and gives you remote control of the device via Wi-Fi and Bluetooth.  You can connect one camera or dozens as seen in the video below.  The included remote lets you start and stop recording on all the cameras at once, as well as tweak settings and modes.

The BacPac will also act as a viewfinder for your GoPro cameras from your smartphone or tablet. The phone and camera connect via an ad-hoc Wi-Fi network, so you can see exactly what the camera sees as you control settings and recording.  The BacPac works with the GoPro Hero and Hero 2

About Yes and Video

Yes And Video can help you tell a compelling story that speaks to your customers. Whether you are starting a business or looking to expand your marketing, your brand is your most important asset. We specialize in creating original, thought provoking and entertaining HD videos to highlight your business and get your content seen across social media platforms.

Give us a call to plant your idea seed and let’s say “yes, and” together.

Keely O'Neill
05:32 13 Sep 19
Kevin (owner) is a creative powerhouse and a joy to work with. Working with him was super easy and he provided... full-service from brainstorming, creative direction and design, script writing, direction, production, and extremely speedy editing. This was a great partnership and we pulled off eight brand videos in 40+ cuts in a super compressed timeline with very little review to accomplish our goals. We're so impressed with his work and can't wait to start work on the next project with Kevin and Yes And Video! If you are looking for a fresh idea to support your brand and want it done right and fast, Kevin is your guy.read more

Scott Pierce
13:59 31 Jul 19
Kevin Lyons, the "Creative Wizard" at Yes and Video, truly lived up to his title. He easily grasped the concepts we... were trying to convey, and offered valuable advice and creativity to produce an outstanding video for us. I also need to mention his outstanding work ethic, professional equipment and crew!read more

Brittany Tipton
20:04 13 Jul 19
Over the years I've worked with a lot of different outside vendors and contractors, Yes And is hands down the absolute... best. I really appreciated Kevin's communication style. He answered all of my questions clearly and was quick to respond to all of my emails. Billing was straightforward and easy. I could tell from the beginning that Kevin was organised and took pride in his work. Over the course of one weekend, Kevin and his crew shot a series of ten short educational videos for my company. My coworkers in the videos had no previous acting experience and a few of them had fear of speaking to a camera but Kevin made everyone feel calm and comfortable. The teleprompter they provided was extremely helpful. The videos were delivered to us ahead of schedule and were beyond our expectations. I highly recommend Yes And Video and would not hesitate to use them again!read more

Kasandra Gillis
03:59 18 Apr 19
Love Yes and Video! These guys are the best and such a pleasure to work with. Fun personalities and amazing talent, it... doesn't get any better than that. I felt so comfortable with them it made my whole experience so much easier than I could have ever imagined. Their quote was so reasonable compared to others that have less talent. Seriously, these guys know what they're doing. Highly recommend. Thank you Yes and Video!!read more

Karl Burns
17:54 17 Apr 19
It was an absolute pleasure working with Yes And Video. Kevin and his team provided several professional videos for our... B2B Hub Platform at T-Mobile. The videos were exactly what we wanted: informative and playful, just like our brand. Yes And Video was creative, fast, and attentive to our needs. I would highly recommend any business that needs video to reach out to them.read more

Matthew Miller
03:57 17 Apr 19
Kevin is his team at YesAndVideo is one of my secret weapons when it comes to creating excellent video content. As a... video creator and marketer myself, often times I need to expand my reach into other parts of the country where I don't necessarily have a team in place. Every time I have used this company we have already been given an excellent end product and the process was fun and easy. I can't really say enough nice things about them and I will continue to refer them and use them.read more

AJ Hiester
01:39 17 Apr 19
I have worked with Kevin at Yes And Video for years on multiple projects. He is creative, dependable, easy to work with... and cares about the work he produces. He has worked with me as a creative director on large scale projects, coming up with theme ideas, creative wraps for meetings and events, as well as writing, producing, and filming videos for these events and more. I would work with Yes And Video again anytime and I highly recommend Kevin to anyone looking for cost effective video production and more.read more

Alexsandra Guerra
19:17 16 Apr 19
Kevin at Yes And Video was great! We had them record our 2-day company summit at the Marriott. Kevin was clear in... communicating, quick in responding to emails and requests, and quick in delivering the final videos shortly after the event. It was easy and fun to work with them, and the quality of the videos were great! We were able to drastically save on money for the project when compared to the hotel's contractors referred to us. Highly recommend!read more
Next Reviews